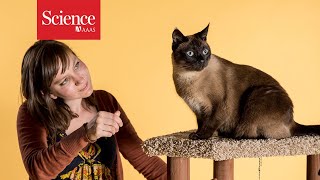 Cats rival dogs on many tests of social smarts. But is anyone brave enough to study them
more videos...